Dom Pedro, son of King Alfonso of Portugal, and heir to the throne, fell in love with Inés de Castro, a chambermaid. They became lovers and soul mates.The scandal was too much for the king who consequently ordered the killing of Ines in front of hers and Pedro's infant child. When Alfonso died, Pedro's first act as King was to have Ines' body exhumed from the grave, dressed in royal robes andcarried 50 miles along a candlelit route to Alcobacá where she was crowned as his Queen. He then forced the entire court to swear allegiance to their new queen by kissing the corpse's hand.Ines and Pedro are both buried at the Monastery of Alcobacá, where Pedro had arranged that their two tombs are placed with their feet towards each other, so that on the Day of Judgement, when they raise from the grave, their very first act will be looking into each others eyes. 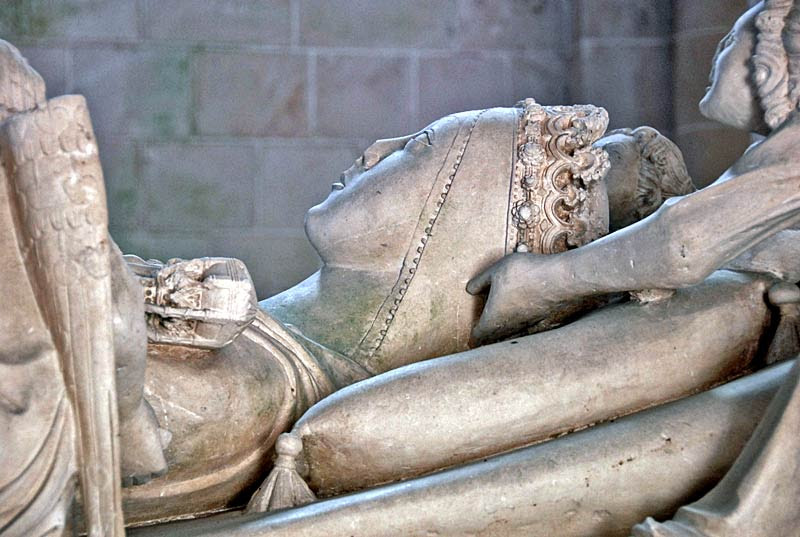 Inspired by the tale of Ines and Pedro, 'Thousand Shades of Blue' is Carmen Gomes' tribute to the land of her ancestors, the sea surrounding it, and the power of impossible love. 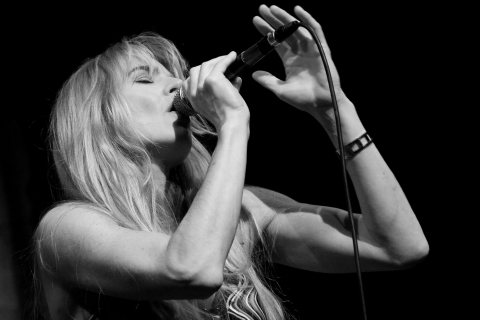 ........''Carmen Gomes has won many awards in the Netherlands and surrounding areas. Like so many new European singers, she sings in English -- excellent English, I might add. She's formed a group called Carmen Gomes Inc., with Folker Tettero on guitar, Peter Bjørnild on double bass and Marcel van Engelen on drums. Her style is bluesy and intimate with a sexy voice that's sweet as dark tupelo honey, and her interpretations are unerring. The musicians play to her and to each other and the ensemble is so tight that the four musicians breathe and move as one. There are some standards on the set that knocked me over with their fresh approach. Any singer can misplace a few accents and rhythms and come up with something that's original, but perhaps also uneasy and a little strange. Not Gomes, who has taken the songs to their bones and then restructured them to suit her style. Thus "Fever" doesn't sound like a cover of Peggy Lee; it sounds like a brand new take on a familiar song. You emerge from hearing it not thinking it's better or lesser than Lee's version, but that it's a valid new interpretation that could have come first.
The same approach works on "Angel Eyes", "You Don't Know What Love Is" and "I'm on Fire". Most of the rest, including the title song, "Oblivion", "Time Will Tell", "Gasoa Blue", and "The Sea" are Gomes originals that fit right in with the standards. The recording achieves exactly what Bjørnild set out as his goal. It can provide the best seat in your listening room. Go to the Sound Liaison site listen to a few samples, download an album and see if you don't agree that this intimate effort is one of the best and best-sounding jazz vocal albums to come along in many a day. By the way, the small audience applauds enthusiastically enough after the last chords of a song die away, but the attendees never interrupt or make themselves known while a song is going on. No doubt they were completely mesmerized into silence, as was I.
Be sure to listen to: On "Dock of the Bay", Gomes creates a languid, bluesy version that is a little bit reminiscent of Bobbie Gentry while still coming across as quite original. It'll cast a spell over you"........

The 12 pieces of music were performed live in the studio in front of a studio audience. The musicians were placed in front of a stereo pair of microphones with additional spot microphones on each instrument. The musicians were playing without headphones, the reason being that we believe that when we get the musicians to play together in the same room,with out headphones, it creates a number of musical and technical benefits:
As they are not ''separated'' by the headphones, the musicians, in order to hear each other are forced to create a natural and musical balance, a balance which is then easily captured by the main stereo pair of microphones. Because of the natural and musical balance the need for compression to control levels is no longer necessary, and since everybody is in the same room,the boxed sound which is so common in many modern recordings is absent, and the sound of the room helps ''glue'' the sound of the recording.
This is all very well but there are also problematic aspects to this procedure:
The room, studio, has to have a good sound. The musicians have to be very good and well prepared as it is very difficult to repair mistakes because of the ''cross talk'' between the instruments, we have to be very precise when choosing and placing the microphones and the puzzle of placing the musicians at the right distance to the main stereo microphones and the right distance to each other, is also time consuming. And when we have a live audience in the studio, we pray that they remember to turn of their cell phones and the ones with a bad cold choose to stay at home. The room where the recordings has been done is the now legendary Studio Eleven situated in the the building of the Dutch World Broad Casting Service. The Studio was used extensively in the 60's by European and visiting American jazz musicians (Wes Montgomery, Cannonball Adderley, Dexter Gordon, Eric Dolphy.....). The Dutch World Broad Casting Service asked Frans de Rond to bring the room back to life as a recording studio, and Frans after seeing and hearing the room jumped at the opportunity. Sound Liaison has been allowed to use the room for our audiophile projects and we are eternally greatfull to the Dutch World Service for the opportunity.

Recorded in Studio Eleven (Hilversum) with a live audience on September 15, 2012.
This recording was made by Sound Liaison for and with lovers of high-end audio recordings.
The file is a one to one copy of the master file (96kHz/24bit).