Review about One Mic Recording by Joe Whip at Audiophile Style.

.....These guys and this recording just rocks. Pace, rhythm, tone and soundstage are just off the charts.
The precise placement of all four of the musicians perfectly matches the photos of the sessions.
The balance of all four instruments is darn near perfect. As you can no doubt tell, I am a huge fan of this recording.
It is one of the best in terms of recording quality I have ever heard. Of course, and as always,
your view of the actual music content may vary quite considerably from mine.
Nonetheless, I think we would all agree that this recording sounds sensational....

Read the whole review at the website of Audiophile Style:

Anything from Sound Liaison
Sound Liaison is a small audiophile type record company from the Netherlands.
They differ from many audiophile labels as they produce music that you will want to listen to over and over again for the quality
of the music and the performances rather than just for the sound quality. Don't get me wrong, the entire Sound Liaison catalogue,
which is very small as they are a new label, features excellent sound. My favorites are Andre Heuvelman's After Silence featuring
classical music, Carmen Gomes Inc.'s A Thousand Shades of Blue and Little Blue both of which feature music more in the pop and
standards vein and two jazz recordings, Impromptu featuring Tony Overwater and Bert van den Brink on piano and bass and
The Witner's Trio's En Azul which features some very creative arrangements of some jazz standards. 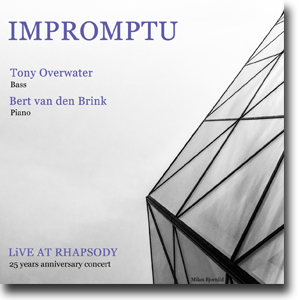 Review by Mark Werlin of HRAudio.net for NativeDSD

“Impromptu” vividly captures the sound of an intimate venue at a very special one-time performance.

Cue the 4th track on “Impromptu” on your music server, turn up the volume, and step for a moment outside
your listening room… you’ll feel as if you’re walking away from the musicians, not from your loudspeakers.

How was this illusion created? Here’s the recipe: take one adventurous audio engineer, add five strategically-placed
microphones, sift it all through DSD recording technology, and stir in a large portion of musical magic.

Describing the spontaneity of live recordings, album engineer Frans de Rond writes:
“The audience becomes part of the music making and help spur the musicians on to great heights.
The musicians feeling the empathy from the audience dare to take chances that one rarely hears in a studio recording.“

When bassist Tony Overwater and pianist Bert Van Den Brink were invited to perform an impromptu set of tunes on the
occasion of the 25th anniversary of the high-end audio shop “Rhapsody”, in Hilversum, the Netherlands, they were definitely
taking chances. The two musicians had never performed together before, and there was no prior rehearsal. An enthusiastic
invited audience packed Rhapsody’s listening room — one wonders how there was enough space to fit in a grand piano.
The stage was set for whatever might happen.

Prior to hearing this album, I was familiar with bassist Tony Overwater through his SACD recordings “O.P.”, a tribute to
the American bass player and composer Oscar Pettiford, and “Jungle Boldie”, an eclectic modern trio project with reeds
player Maarten Ornstein and drummer Wim Kegel. Overwater’s ability to adapt and communicate effectively with pianist
Bert van den Brink, in spite of never having performed together, is a measure of his experience and creative resources.

Half the tunes in this set are well-known standards: “If I Should Lose You”, “I Fall in Love Too Easily”, “Nardis” and
“My Foolish Heart”; the latter two songs are closely associated with pianist Bill Evans. Three improvisations and
Tony Overwater’s composition “De Boot” fill out the set. Van den Brink generally opens with an unaccompanied introduction,
then states the melody of the song, which sets a tone for Overwater’s accompaniment. Each player solos in turn,
having established the tempo and overall mood in which the piece will be presented.

Appropriately enough, considering the name of the audio shop, Bert van den Brink plays in a rhapsodic style, freely
embellishing and orchestrating the songs with decorative arpeggios and dense chords. The familiarity of the standards
provides a framework for reframing the melodies in fresh and unexpected turns of phrase. Overwater accompanies with
restraint and good musical judgment, making for a unified sound that belies the absence of a performing history with
van den Brink. It all works, which might have surprised the musicians and much as it pleased the audience.

Many of the other releases from Sound Liaisons are studio sessions recorded with a single-point stereo microphone,
a rigorous and painstaking approach to production. The label has a goal of establishing a distinctive house sound while
documenting new jazz music from the Netherlands. It’s an exciting venture that has earned critical praise from audio
and jazz enthusiasts, and a place in this listener’s music library. 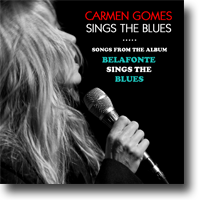 Sound Liaison is a Netherlands based partnership two bass players, Frans de Rond and Peter Bjørnild. They’ve assembled some terrific artists who play great jazz and given them high definition sound.  I raved about their initial recordings on the Sound Stage! Network, and have enjoyed watching their progress in listening to their appealing new albums. 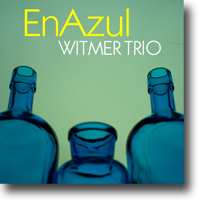 Their newest program is titled En Azul and features the Witmer Trio, Cajan Witmer – piano,
Han Slinger – double bass, and Maarten Kruijswijk – drums. The trio has been together for 20 years and all the players sound very comfortable in their skins. Their emphasis is on melody with ornamentation and variation that heightens a sense of melody rather than distracting from it.  And they’ve picked some terrific tunes to work with – Carioca, TheGentle Rain, Moon River, Moonglow, Rhapsody in Blue, Recado, and St. Louis Blues, to mention a few. The playing is delightfully impeccable and the recorded sound nearly so.  The trio sounds like it’s playing in a real space and is nicely spread between speakers with no exaggeration. The piano sound is perfect as is the sound of the many percussion instruments that are so imaginatively employed. The bass is solid; I could use just a tiny bit more focus on the attacks. Sound Liaison recordings are only available as high quality downloads. Many download formats are available including DSD and PCM 24bit/96kHz stereo. If you’re searching for real sounding intimate jazz, give the work of these folks a try. You’ll not be disappointed and it’s so good-natured, I’ll bet it will put a smile on your face. 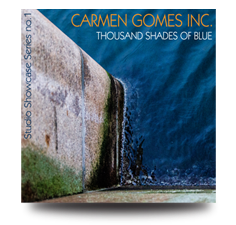 American Blues from the Netherlands

I've been among the prophets saying that high-resolution downloads are the future of audiophile music sales. Surely it will benefit the majors to make high-quality downloads a first choice rather than an MP3 extra, but I believe that individual artists can benefit as well. Most new-to-the-scene performers have little money for middlemen and disc manufacture, yet can get things together for the Internet.

Frans de Rond and Peter Bjørnild have taken this approach with Sound Liaison, producing recordings available only in 24-bit/96kHz downloads that mirror the master recording. And man, are they ever sweet. I've seldom heard recordings that were so successful in both performance and sound aspects.

De Rond hails from the Netherlands, where he studied double bass at The Royal Conservatory in The Hague while concurrently studying recording techniques. Bjørnild also studied double bass, moving to the Netherlands to continue studies at The Hague. Since graduating, he has played almost every type of music, from classical to jazz. Together de Rond and Bjørnild bring two pairs of golden ears to their label. Bjørnild claims that, "a recording should be as realistic and beautiful sounding as possible. As if, when closing your eyes, you find yourself in the best seat in the hall."

The partners discovered a fine recording hall (Studio-Eleven, Hilversum) and set out to record amazing musicians in this great acoustic place in front of live audiences. It's a daring feat; one take and no place to hide, but the abilities of the musicians involved make it seem easy. I chose to talk about the first album by Carmen Gomes Inc. It was a tough choice because all of the three current albums were worthy of review.

Carmen Gomes has won many awards in the Netherlands and surrounding areas. Like so many new European singers, she sings in English -- excellent English, I might add. She's formed a group called Carmen Gomes Inc., with Folker Tettero on guitar, Peter Bjørnild on double bass, and Marcel van Engelen on drums. Her style is bluesy and intimate with a sexy voice that's sweet as dark tupelo honey, and her interpretations are unerring. The musicians play to her and to each other, and the ensemble is so tight that the four musicians breathe and move as one.

There are some standards on the set that knocked me over with their fresh approach. Any singer can misplace a few accents and rhythms and come up with something that's original, but perhaps also uneasy and a little strange. Not Gomes, who has taken the songs to their bones and then restructured them to suit her style. Thus "Fever" doesn't sound like a cover of Peggy Lee; it sounds like a brand new take on a familiar song. You emerge from hearing it not thinking it's better or lesser than Lee's version, but that it's a valid new interpretation that could have come first.

The same approach works on "Angel Eyes," "You Don't Know What Love Is," and "I'm on Fire." Most of the rest, including the title song, "Oblivion," "Time Will Tell," "Gasoa Blue," and "The Sea," are Gomes originals that fit right in with the standards. The recording achieves exactly what Bjørnild set out as his goal. It can provide the best seat in your listening room. Go to the Sound Liaison site, listen to a few samples, download an album, and see if you don't agree that this intimate effort is one of the best and best-sounding jazz vocal albums to come along in many a day. By the way, the small audience applauds enthusiastically enough after the last chords of a song die away, but the attendees never interrupt or make themselves known while a song is going on. No doubt they were completely mesmerized into silence, as was I.

Be sure to listen to: On "Dock of the Bay," Gomes creates a languid, bluesy version that is a little bit reminiscent of Bobbie Gentry while still coming across as quite original. It'll cast a spell over you. 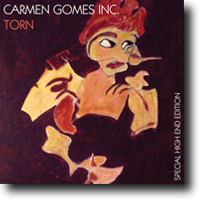 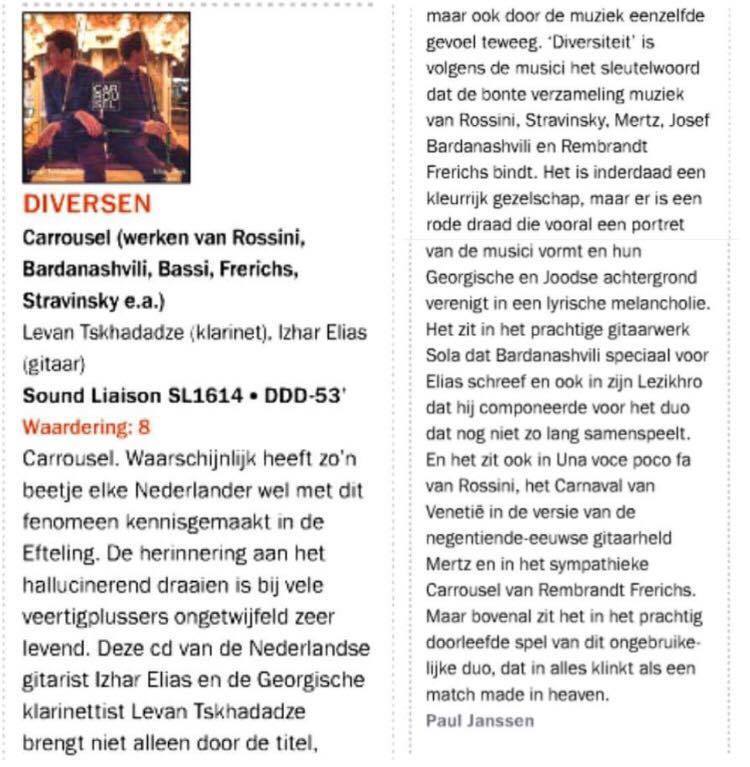